Who are the most hated teams in the English Premier League?

I would like to invite all football fans to vote for the most hated team in the English Premier League. Although the invitation is open to all I would like to point out that this is an Arsenal blog and we would like the visitors from N17 to behave with respect and those from SW6 to refrain from violence.

I read several articles on this subject and checked some polls and votes. Needless to say that the press is full of editorial errors placing Arsenal even above Tottenham in the Hate Tables, but we know we are and always will be the most loved club in the world. Those who don’t love us are of the jealous disposition.

The ‘hate’ results are predictably inconclusive and inconsistent.  Surprisingly though the top spots are not always occupied by one of the Top Four teams, ie Manchesters, Chelsea or Liverpool.  There are those who still hate Leeds and Portsmouth the most, strange if you ask me. So why do we hate some clubs more than others? Is it all about success, or a manager or proximity of the stadium? Manchester City are currently probably the best club in this country, yet nobody but the red Mancs hate them, why?

Maurinho has been mouthing again claiming that Chelsea are the new United and everybody loves to hate them. He is obnoxious enough to pass some of the hatred towards him, Jose Maurinho onto the whole club. Some pundits say that Jose is the next Ferguson, a genius amongst ordinary managers. I fail to understand what they are saying, but English is not my first language, so I suspect something is missing in translation.  It is true that I used to hate ManU and Fergie, especially when they were at their best, but that was sheer tribal rivalry. Today I hate Chelsea more than any other club, mainly because of Maurinho,  but John Terry, Abramovitch’s impact on the English League, Cole’s saga and Cech’s headgear do nothing to endear them to me.

I do not expect a reasonable and equitable response, but please try to justify your choice.

Thank you Eddie, something to get the ol’ vitriol flowing. Tin hats are available upon entry to the blog, not obligatory but highly recommended.

GunnersoreArse, publishing articles which other blogs refuse. The Charlie Hebdo of the Arsenal bloggosphere. JE SUIS GUNNERSOREARSE! Right, let’s get out of here sharpish and have a glass of wine. Where’s me tin hat 🙂

Today starts a new series of Memories of Highbury and Islington. If there are other bloggers who wish to contribute then please let me know in the comments section.

Good morning all it’s my pleasure and privilege to be the first guest writer on Gunnersorearse. Some readers of Arsenal blogs already know part of my background so I will try not to be overly boring or repetitive.

I was born on Avenell Road and my very earliest childhood recollections are of the Arsenal. Both sides of my family were avid Arsenal supporters and with a total of 18 uncles and 40 plus male cousins it’s understandable why the Gunners were a dominant part of the conversation. My maternal grandfather, who delivered coal by horse and cart around Highbury, was a fanatical supporter and witnessed the very first game the Gunners, played at Highbury in 1913. So that means our family has supported the Arsenal for over 100 years.

My Uncle George also lived on Avenell Road and his parlour was the gathering place after every home game – the post mortems held there were a huge part of my upbringing and indoctrination into a family of Gunners. With no TV or Radio coverage of the games the highlight of the gathering was the weekly football results, they were broadcast at 5:00 pm every Saturday – the parlour hushed as the results were read out, but there was always a huge cheer if the Spuds lost. The results then sparked off a conversation about the standings and Arsenal’s chances of winning anything. That was not dissimilar to today’s scenario, you see the family were used to winning and had just come through the Arsenal glory day’s under Herbert Chapman and George Allison, a lot of the discussion centered around Tom Whittaker’s ability to carrying on the winning tradition. Well Tom did well in his early years winning 3 trophies, but after 3 trophy less seasons he left and Arsenal sank into the most barren period in our history winning only 4 trophy’s in the 33 years between 1953/54 and 1986/87, when under George Graham we won our first League Cup.

A street party in Oldershaw Road, to celebrate the end of WW2

Sunday mornings were always waited in anticipation of getting delivery of our 3 Sunday Papers where we would get news stories and actual pictures of Saturday’s games. Dad always got first dibs and as the eldest son I got the next, believe me the sports pages were devoured and every detail was absorbed. I would cut out all of the pictures pertaining to Arsenal plus the League tables and stick them up next to my bed. Unbelievable as it may sound to today’s generation those were the two main sources of information about the previous day’s games along with the odd news reports during the week – compare that with today’s information saturation.

Us Avenell Road boys used the gate into the ground as our goal, we were a poor bunch so we had to use a rag ball, hand sewn by my mum, as our football. We imagined ourselves as one of the team, I aspired to be Jimmy Logie, a great Scottish inside forward who set up both goals as we won the 1949/50 FA Cup Final 2-0 against Liverpool. After he retired Jimmy fell on hard times; football was not the lucrative profession it is currently, and he was a big gambler. He ended up selling news papers in Piccadilly Circus and died in 1984, aged 64. How very sad! 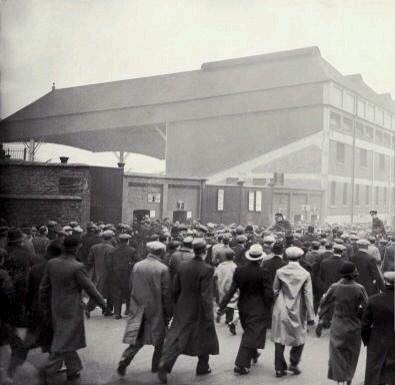 My Dad got the chance of a permanent job at the Starbrush Company; this meant that we had to move away from my beloved Avenell Road and the Arsenal. I threatened to leave home and live with my Grandparents on Stavordale Road but I changed my mind when Dad said he thought that was a good idea. We moved to Oldershaw Road just off of the Caledonian Road, the houses were very run down and damp but we moved in anyway and shared a space with my Dad’s brother, later on we got our own house. It was long walk back to Highbury but I was there very week to watch my heroes.

Through the internet and Gunnersorearse I discovered that Northbank lived on Sonning Street, which backed onto Oldershaw Road – small world indeed. We grew up a decade apart on the same streets but as it turns out I only delivered milk to a prison (Pentonville) while NB69 got a far more up close and personal look inside of Wandsworth.

GunnersoreArse, bringing you the history of Islington and the Arsenal.